What is the future of humanity? Can we survive our current dangerous flirtations with climate change and nuclear war? Do we even deserve to?

RUNNING BEAR tells the story of an ambitious project to design a mission capable of transporting a thousand highly-skilled humans to colonize another solar system, carrying along an Archive of everything that makes humanity worth saving--art, literature, cinema, poetry, and of course, science.

The story takes place over three interwoven time frames: Oscar Running Bear and his team of astronauts and scientists as they make their final preparations in the BioDome in the Nevada desert before ascending into orbit; Oscar's first conversations with the eccentric billionaire who's bankrolling the mission; and Oscar's troubled childhood on the Navajo reservation where he grew up. These three timelines collide in a bleak ending that seems to snuff out all hope for the mission and for humanity--and yet a few threads of hope remain.

RUNNING BEAR was awarded F(r)iction Magazine's Short Story Award in the spring of 2019, and has just been published online in issue #14--the Survival Issue. If you like what you read, rejoice: the story doesn't end here. In fact, this is just the opening chapter in a longer and more involved story, also titled RUNNING BEAR, which carries the story of the mission (and some of the same characters) much farther into the universe. 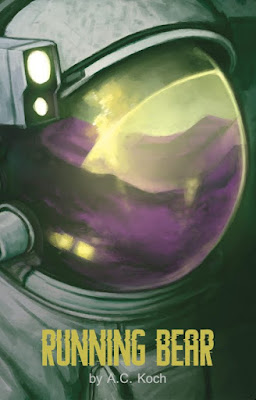